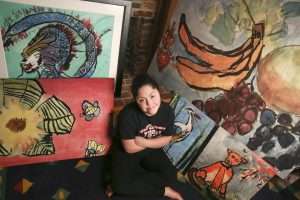 Sophia is a young lady with a passion for art, dancing, music, family, friends, and fun.  She also happens to have Down syndrome.

As a baby her health was precarious; her fighting spirit showed through as she overcame those early struggles.  Before Sophia was born she was diagnosed with very severe heart defects.  Any one of them could have been fatal.  She was born literally with half a heart. Luck and divine providence brought us to Dr. Mary Donofrio, our longtime and beloved cardiologist. Under her care and guidance, Sophia had two open-heart surgeries before she was two years old.  Despite several subsequent surgeries, other hospitalizations, and medical challenges, she’s an active and strong young teen.

Sophia has studied ballet for nearly eight years, dancing in several local productions.  She enjoys horseback riding and swimming lessons.  She has grown to become a self-advocate, involved and engaged in the community.  In 2013, she was selected to walk the runway as a model for the Global Down Syndrome Foundation’s Gala in Washington, DC and, in 2016, the National Down Syndrome Society chose her picture as one of many people with Down syndrome to appear in its video to kick off the national Buddy Walk in New York City.

But it is art that truly captured Sophia’s imagination and become her heart-felt and focused way to express herself.  Through camps and classes at Libertytown Arts Workshop she has worked in painting, drawing and pottery.  She especially loves Chinese watercolor painting.  She brings an infectious sense of joy, humor and exuberance to her art and to her life.

Lauren Dubrinsky is a native New Yorker and artist, who moved to Atlanta 33 years ago at age of 23. After being a stay-at-home mom for her three children, Lauren 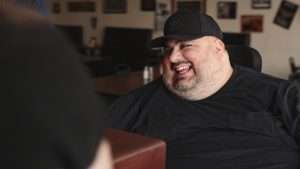 My name is Nick Papadopoulos. I am a 43 year old. My purpose in life is to bring people together with compassionate heart and humor. I believe that I am